It’s named the Golf Park because, well, calling it the “Have Fun Doing Whatever You Want” Park just seems silly. Even though it is appropriate.

Featuring the most casual par-3 course in the world – certainly the most informal Jack Nicklaus Signature course of all time – the Red Ledges Signature Golf Park reflects our young, family-focused community.

Technically, golfers at the Golf Park have the right-of-way on the 30-plus acres, but don’t tell that to the frolicking dogs, the neighborhood kids with baseball mitts playing catch, or the walkers who stroll freely over the grounds.

Indeed, the mission statement for the Golf Park says: “Our goal is to eliminate the stuffiness and intimidation of traditional golf.” That is not said with any irreverence to the game, but with an intelligent look forward to its future.

Golf is central to the active luxury lifestyle here at Red Ledges. Besides the Golf Park, our 18-hole championship Jack Nicklaus Signature course is regarded as one of the best residential courses in the country.   Plus, Red Ledge’s junior golf program is led by one of the Top 25 instructors in the country. But while youngsters here are surrounded by golf, they are not smothered by it.

“It’s all about having fun,” says Jon Paupore, the Director of Golf, who has been ranked the No. 1 golf instructor in Utah by Golf Digest, as well as one of Golf Tips Top 25 in the country. “We engage kids at an early age, but we are not big into being specialized. We want kids to learn how to be athletic, to play soccer, baseball, anything they enjoy. All of that will help them in their golf future, whatever form that takes.” 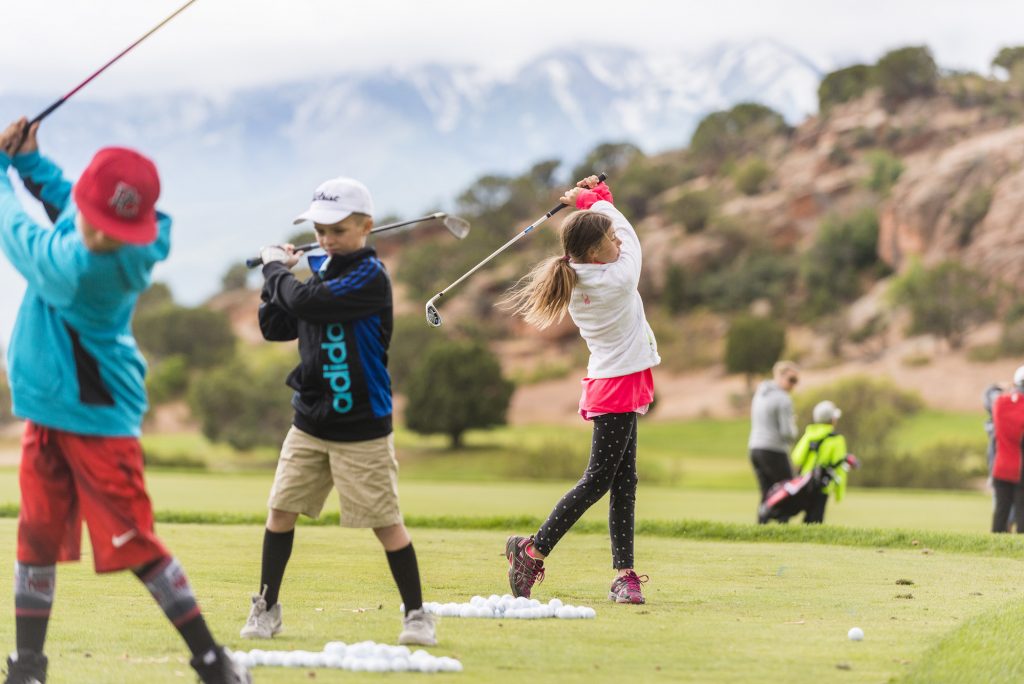 The Golf Park plays a significant role in getting juniors to pick up the game. In the casual park environment, Jon sometimes hands his students a tennis racket and tennis ball and asks them to hit the ball as far as they can. “They love to just smash it,” he says. “They improve their hand-eye coordination, and the athletic motion of hitting the ball is just like finishing the golf swing.”

Jon learned teaching tricks like that from Hall of Fame golf instructor Jim McLean. Working with McLean in Florida led to Jon to Utah in 2010 to start his mentor’s Golf School at Red Ledges. “We do not teach a regimented method for the golf swing,” Jon said. “If we can make it fun and show these kids some success, their eyes open wider and wider. And they are on their way.”

Beyond learning the basics and playing the par 3s in the informal setting of the Golf Park, Jon’s  junior students gradually play the Red Ledges championship course, where they start from the Golden Bear Tees, a special set of tees strategically designed into the fairways to help golfers transition from an easier tee to the Championship tees.

“We don’t want juniors to be discouraged when they move up to the next challenge,” he explained.  “The Golden Bear Tees are the perfect step from the Golf Park to the championship course. And it’s a lot of fun to play those tees. It’s been a great way for families to go out and have fun on the golf course together.”

Which is what Red Ledges is all about: families having fun together.

“The club’s focus is on families and our dedication to junior golf is part of that,” Jon said.

This philosophy is ideal for the Paddock family, who have been seasonal residents the past four years, enjoying the ski season as well as the summers. Davis and Anissa Paddock both play golf and have introduced their daughter, Harper, 14, and son, Lawton, 12, to the game through the Red Ledges junior program – and the Golf Park, which is right outside their back door.

“We want to give our kids exposure to outdoor activities they could learn from early age,” Anissa said. “The junior golf school has been a fun and inviting introduction to golf, as well as great way to meet other kids in the community. The Golf Park gives them access to a course that is not intimidating, where they can develop a love for the game while developing their skills. We just hop on and go … and take our dog.”

Also, Red Ledges puts together a summer team of boys and girls who compete in the local PGA Jr. League. The club’s team has become popular, growing from one team of 10 players in 2016 an anticipated six teams this season, usually playing matches at the Golf Park.

“The league teaches the rules and competitiveness, but is very user-friendly,” Jon said. “Having the Golf Park is perfect for play, and such a different atmosphere from other courses.”

While making golf as much fun as possible, Red Ledges also has produced some accomplished young players.  And this summer, Red Ledges is scheduled to host a Utah regional qualifying tournament for the Junior World Championships, one of the most prestigious events in the game.

“Our philosophy is that to sustain the game of golf, we need to get juniors playing the game,” Jon said. “We want them to understand the game and see the successes the game can bring. Hopefully, we will get lifetime participants.”