Stargazing with Friends and Neighbors

Throughout history, people have been globally captivated by the stars. While stargazing, even Marcus Aurelius once said, “Dwell on the beauty of life. Watch the stars, and see yourself running with them.” 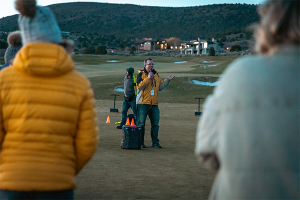 But if you have ever lived in a city, you know that walking outside and looking up at the stars may not be enough. Stargazers must travel outside the city to find a place with little light pollution. To help protect the world’s dark skies, the International Dark-Sky Association has started certifying areas as “dark parks.”

Globally there are many areas certified as dark parks. However, Utah has the highest concentration of dark parks in the world. Stephanie Potempa, our events director, organizes an annual community stargazing event each spring to take advantage of Utah’s dark skies.

“Although stargazing can happen almost any night throughout the year, I organize this event in the early Spring,” says Potempa. “Although members may need to bundle up, the sun sets early enough that members can see and enjoy the stars and still get to bed at a reasonable hour.” 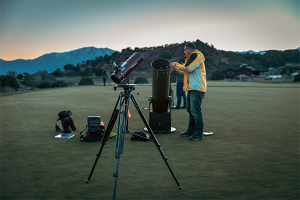 Clark Planetarium. Although Quayle has worked at the Clark Planetarium for many years, he is involved with other organizations, such as NASA’s Solar System Ambassador program.

By starting the event before the sun sets, stargazers can see and appreciate just how much the stars in the sky move throughout the evening. As the night sky sets in, Quayle starts pointing out a few stars visible at dusk. 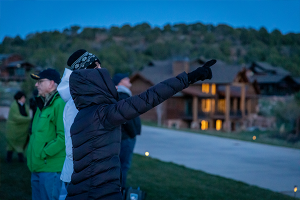 At the event, the Winter Triangle is pointed out, together members name the three stars in this formation, which include Betelgeuse, Sirius, and Procyon. Next, Quayle asks members to point out the stars that form the Big Dipper. Quayle uses these star formations to teach members the difference between constellations and asterisms.

Although both constellations and asterisms are star patterns visible to the unaided eye—asterisms do not form an entire constellation on their own. For example, the three stars from the Winter Triangle are found in three separate constellations. Likewise, the Big Dipper is also an asterism, but it is part of the Ursa Major constellation.

As the night progresses, Quayle invites members to look through one of the two 10-inch Dobsonian 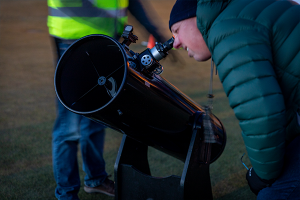 Telescopes he brings. These telescopes give members a chance to get a closer look at Betelgeuse.

By this point in the evening, the sky is much darker now. The darker skies allow Quayle to align the telescopes so members can get a closer look at Mars, other wonders of the sky, and a few satellites. Through the telescope, these satellites look like a single shooting star.

From wine tasting, to fly fishing, to stargazing—many Red Ledges Club events are planned so that members have the opportunity to learn from local experts. These experiences provide members with an opportunity to try new things while meeting community members with the same interests.